The 30th edition of Cluj Rally shall have the official name of  Raliul Clujului Star Lubricants [ Star Lubricants Cluj Rally]. This name is intended to be an expression of gratitude to the traditional partner of this event: Star Lubricants – a Cluj Company, an authorized dealer of Exxon Mobil oils in Romania. This company has been supporting the organizers of this event starting with 2005. And, as tradition is an important feature of this event, important companies in Cluj County along with official authorities understood to support in 2011 too this racing as they have always did.

Unlike the previous years, the organizers have prepared for this year a more non-conventional approach for racing promotion, as its camel logo was presented for the first time with a stage ahead that is within the Targu Mures Rally which was carried out in the period ranging from May 6th � 7th 2011, in the counties of Mures and Harghita. Cluj Rally has been appreciated on this occasion at the highest level, the competition vehicle of the crew Horatiu SAVU / Gheorghe NEMES was admired by Mr. Emil Boc, the Romanian Prime-Minister along with a number of personalities in the Romanian Government, who were visiting Targu Mures. Mr. the Prime Minister has recalled the period during which him, as the mayor of Cluj-Napoca municipality has supported this event and in which he participated as a guest.

Star Lubricants Cluj Rally, the 2011 edition, was carried out under the aegis of the Romanian Federation of Sport Motoring with the assistance of: Cluj County Council and of the City Hall and of the Local Council of Cluj-Napoca municipality, as well as the County Department for Sports and Youth of Cluj. 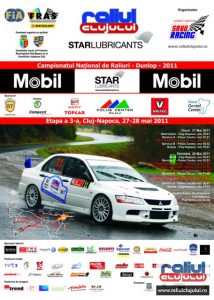 The entries to the 2011 Star Lubricants Cluj Rally are still going on, even if the official entry period has ended. 54 crews and 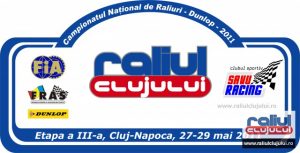 This 28thday of March, 2011 the documentation for Cluj Rally, edition 2011 was sent to be validated by the Romanian Federation for